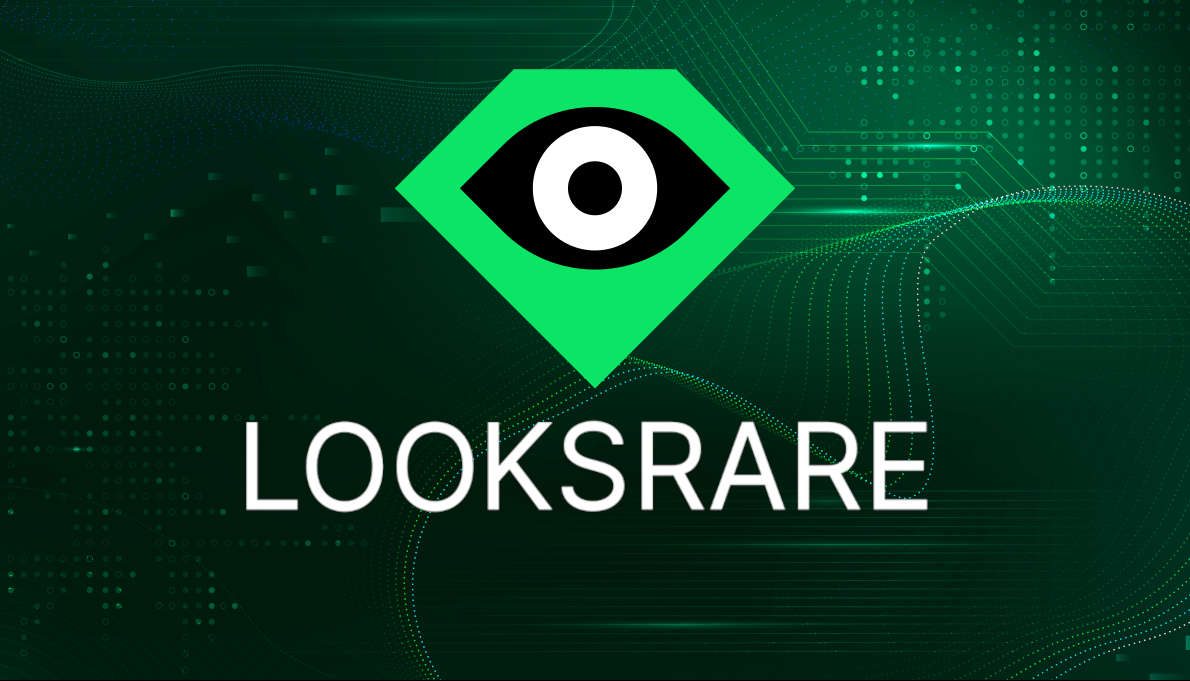 The explosive growth of the NFT sector stimulates the rapid appearance of new marketplaces, among which LooksRare appears to be a significant newcomer. Below you’ll find a review of the basic features of LooksRare, a young platform that confidently joined the NFT industry successfully competing with such giants as OpenSea.

LooksRare stands for a recently launched venue for the acquisition of non-fungible tokens, destined to become a rival to such major industry heavyweights as OpenSea. The project was established in early 2022 with the digital collectibles platform already earning $2 billion in January. The brand-new NFT marketplace presents itself as a trading venue centered entirely around blockchain users. More features are expected to be launched by the team, subject to users’ requests.

Who created the LooksRare marketplace?

The actual people behind LooksRare still remain anonymous with the names “Zodd” and “Guts” along with a crew of eleven dedicated people who are concentrated on designing the services on the platform.

LooksRare’s transaction experience appears to be highly instinctual for seasoned NFT traders, in the meantime bringing cutting-edge functionality to the table, most notably momentary royalty payments for generators, as well as hybrid diverse token purchases.

New services may be successfully integrated into the platform over time owing to the platform’s flexible smart contracting system.

LooksRare plans to implement certain functionality on the platform soon:

Among the essential advantages and highlights of the LooksRare NFT Marketplace are:

The uniqueness of LooksRare

LooksRare offers the community’s first NFT trading venue with rewards for engagement. Signing up for the platform is extremely easy: you literally only have to click 2 keys to attach a cryptocurrency wallet (MetaMask, WalletConnect, and Coinbase are available now). Users may trade NFTs here to collect the bounty. Such members earn LOOKS tokens.

The charge for the NFT transactions there is just 2%. These charges are shared fully among the staking market players. There are some intriguing benefits for members of the marketplace at the moment. For instance, once your NFT trading turnover exceeds 1,000 EHT, you will obtain LOOKS tokens.

The LooksRare design model is a straightforward reaction to the preceding generation of the NFT trading platform (such as OpenSea), aimed at fostering the NFT community by remunerating members for their involvement. Clearly, it is rather tricky to be compared to the renowned platforms. However, the creators of LooksRare have a grand plan: the creation of an NFT trading venue for admirers of NFT by individuals within the NFT industry community.

Following its launch, LooksRare even carried out a so-called attack on OpenSea, attempting to lure as many contributors as possible to its venue. LooksRare went public and declared 120 million of its own LOOKS tokens to be handed out. As early as the end of January 2022, the NFT LooksRare exchange surpassed OpenSea in terms of trading volume.

LOOKS represents the token native to the LooksRare NFT marketplace. The crew has devoted 75% of its tokens to a diverse range of community incentives, while 120 million LOOKS have been allocated for giveaways.

Two criteria were required for a participant to be in a position to be eligible for a LOOK:

Where can I buy LOOKS tokens?

As of the end of December 2022, the LOOKS token is quoted on Kucoin and Uniswap at $0.1508. Likewise, you can easily buy the platformâs token with the lowest fees at MEXC, offering the highest level of security.

The new market for NFTs is currently competing for market leadership, posing a challenge to OpenSea in the fight for customers within the industry. Nevertheless, NFTs are only in their initial years of growth, still a long way from being utilized by the public for any purpose besides art & collecting, and they have a lot of work ahead of them.

Cloud Mining Without Deposit and With It: Is it a Scam or Not?

Top Legit Ways to Earn Bitcoin and Other Cryptos Online

What Can You Actually Use Bitcoin For?