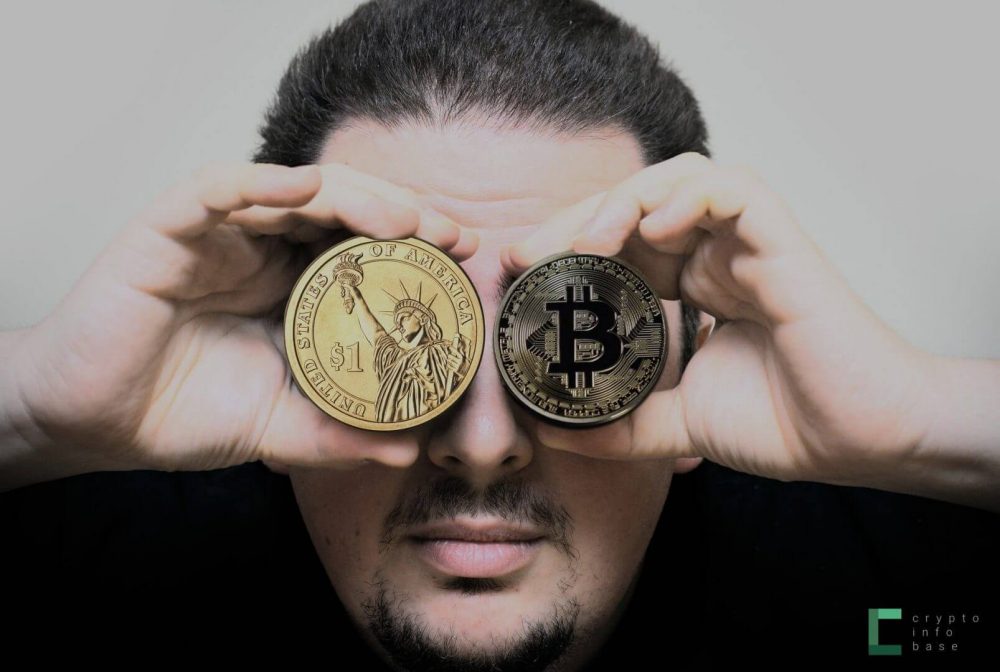 Bitcoin price has shown relative stability in recent times. It finds support at about $3,5k mark and is flowing showing temporary pumps and dumps. Many people have bought it at winter highs and are now waiting for price spike. Is there a reason for this? Will the major cryptocurrency go through the roof and are we at the first inning right now?

You can easily find out Bitcoin price today. But it’s hard to predict how much it will cost tomorrow, in a month or a year. Let’s try to analyze fundamental factors, which might affect BTC price, and experts’ opinion in this regard.

BTC showed stability in recent times (except huge price decrease in November-December when the cryptocurrency lost about $3,000 during one month). Everyday volatility of Bitcoin is relatively low at the moment, especially comparing with alts from top 100 by market cap. You can see the major cryptocurrency’s current value below.

We think that Bitcoin has proven its leadership amongst cryptocurrencies. Despite the constant emergence of new high-tech altcoins, BTC is still a market determiner.

In general, Bitcoin has shown much better stability that other cryptos from top 10 by market cap, not to mention other altcoins, and hundreds of shitcoins flooding cryptocurrency space.

You know, many experts have expressed their opinion on Bitcoin price. They can be divided into three groups:

Should you believe experts’ opinions? We think that you cannot treat them as a single instance of truth. However, they may be taken into account by you to form your own view in this regard. You also should bear in mind that some people make loud statements just for hype. Well, let’s consider some of the most known bitcoin price predictions made by experts.

John McAfee is a founder of the antivirus software company and early cryptocurrency adherer.

This man is famous for his extraordinary Bitcoin price forecast made on 29 November 2017: $1 million by the end of 2020.

John promised to eat his genitalia if his prediction would be wrong. This was probably the best Bitcoin forecast. But will he come true? This prediction seems to be unrealistic. Just see at the graph made by bircoin.top website – such a huge way the crypto has to overcome to reach the predicted mark.

We think that there is a high risk that John’s forecast would be wrong. He made wrong forecasts after the scandalous prediction. At the end of May 2017 McAfee said that Bitcoin would surpass $15,000 in June. As we all know, Bitcoin didn’t reach this price mark in June this year. John also gave unfulfilled predictions regarding some other cryptocurrencies, including Golem. The only question what will he do if he will wrong in this case? Will he eat his male organ?

“Hedge fund legend” (as CNBC called him) Michael Novogratz, who is a founder of crypto investment company Galaxy Investment Partners, said in November 2017 in his interview for CNBC that “Bitcoin could be at $40,000 at the end of 2017”. To his credit, he didn’t recommend retail investors to put any more than 1–3% of their net worth in cryptos. Michael’s predictions were close to truth – BTC reached $20,000 in December 2017, but then its price began to fall.

In the end of August 2018, Fundstrat’s cryptocurrency analyst Tom Lee claimed that the crypto “could end the year explosively higher.” According to his opinion, “it’s possible” that BTC price could rise to $25k this year. There is the beginning of 2019 now, but the father of crypto’s is still flowing in 3,000-4,000 diapason. Probably due to watching price falling, Thomas said in December 2018 that he ceased to provide “timeframes for the realization of [crypto’s] fair value”. Otherwise speaking, he stopped price forecasting. In February 2019, Lee just said that he expected betterment of the situation of the crypto, avoiding precise numbers but referring to several potential price catalyzers.

In the summer of 2018, Charlie Lee, Litecoin founder, gave a valuable advice to investors. He advised to buy at least one BTC before purchasing altcoins, even LTC. In February 2019, in the Litecoin Telegram group Charlie was asked when the future price of BTC will reach $20k (see the screenshoot from Reddit below). Lee asked that this should happen in the upcoming three years. Perhaps this is one of the most objective experts, whose opinion, as a rule, corresponds to the real state of affairs. 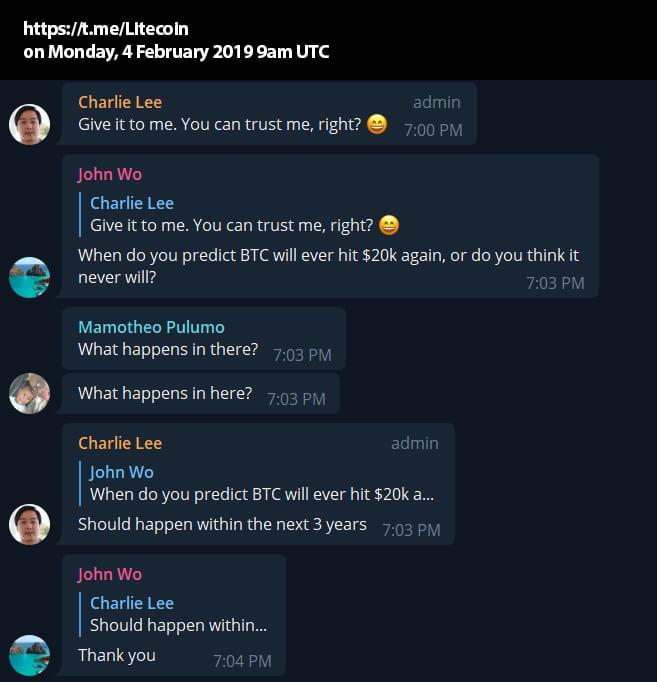 There are both bulls and bears amongst crypto experts. In the spring of 2018, Kenneth Rogoff, a Harvard economist, said that the main crypto would shrink to $100. According to him, this is a more possible scenario than hitting $100,000.

You know, Bitcoin was buried hundreds of times. Despite demonizing predictions, it survived and, moreover, become the most profitable asset in the world. His point of view might be the case. However, now there is no tightening of state regulation that could lead to the deterioration of Bitcoin condition.

What Do Scientists Think?

Bitcoin seems to be the most researched cryptocurrency. Many scientists have tried to understand its nature. Analysis of their work might be helpful in forecasting BTC price because researchers have clarified some fundamental factors that could influence the coin’s value.

Scientists D. Peetz and G. Mall in their article “Why Bitcoin is Not a Currency But a Speculative Real Asset” published in September 2017, argued that the leading cryptocurrency has the non-realistic value. They wrote that it reached bubble territory and would ultimately correct. However, they believed that BTC the bubble could become even bigger in the intermediate term due to the market financialization. As we see, the scientists were definitely right, unfortunately.

Eric Budish at University of Chicago Booth School of Business, suggested Bitcoin would be majority attacked (51% attack) if it became sufficiently economically important, that is if it became a “store of value” akin to gold. According to him, there are some economic limits in Bitcoin’s reaching such a role. This is an interesting thought. However, BTC is hardly to be hacked.

Jochen Möbert in a large paper concluded that there are many mistaken analogies and wrong assumptions. Some time is needed to make the forecasting discussion more informed. Moreover, several years are needed for firm establishment of the technology. Also, the scientist raises the question regarding the fact that Bitcoin can be replaced by another, more advanced cryptocurrency or by its current competitors, during this time.

When the value of the major crypto approached the mark of $20,000, everyone said that the conquest of the peaks will continue. Someone swore that he would soon sell one BTC for $100,000. Someone [John McAfee] even was going to eat his genitals, if the “impossible” happened and Bitcoin did not reach the mark of 1 million US dollars the next 2 years.

“The Moon” in December 2017 – January 2018 did not have a sufficient market justification. Today, BTC pricing is not as speculative as it used to be earlier. This means that the Bitcoin price growth will slow down significantly. However, periodic market recessions will be followed by growth.

At mid-October 2018, Fidelity Investments, one of the world’s largest asset managers, announced the launch of a unit focused on providing crypto-related services to institutional investors. The exact date of Fidelity Digital Assets launch is now known. This should happen in the first half of 2019. This event may be a powerful driver for cryptocurrency market grow within this year.

Fidelity Investments is considered the fifth largest asset manager in the world, offering investment and custody services to 13,000 consulting firms and brokers. The new division was called Fidelity Digital Assets. Its services will include the platform for the cryptocurrency trade, consulting services, and physical storage of cryptoassets.

There is also a big hope regarding BAKKT launch. BAKKT is a platform that will allow users and institutional investors to buy, sell and store digital assets in the global ecosystem. Well-known project partners were announced, including Microsoft Technology Corporation and Starbucks international coffeehouse chain. The platform’s launching was rescheduled several times. As of January, the platform was only forming their stuff. BTC price after BAKKT should stir up the market. The launch is expected to be happened in summer this year.

Many ordinary folks and investors were waited for adoption of the Bitcoin ETF in February. However, the main application by CBOE and VanEck was withdrawn due to the US government shutdown. Later the applicants resubmitted it to the SEC, but the process of its considering will probably take a long time.

There is an opinion that Bitcoin price surges are mostly associated with block reward halving, not with adoption of cryptocurrencies, entering institutional investors, and other factors. This opinion deserves special attention and here’s why.

Halving events in Bitcoin history (in 2012 and 2016) occurred before major price surges. Halving means reduction in the block reward and, subsequently, decrease of miners’ revenue. To prevent the risks in functioning of the network, mining should continue to be financially attractive. The price increase will provide miners with sufficient reward.

There is even a website representing Bitcoin block reward halving countdown (bitcoinblockhalf.com). This is also a sign of that some people are highly expecting this date. As of date of writing, 459 days are left.

Bitcoin Price Prediction In 5 Years and in 2025

What will Bitcoin be worth in five years? According to Walletinvestor website, its future price will be approximately $32,000 this year. However, this forecast has been made on the basis of technical analysis (by Machine Learning developed by the website’s team). It is our understanding that it does not take into account fundamental factors, such as the launch of the Bakkt platform.

Bitcoin Price Prediction In 10 Years and in 2030

We do believe that cryptocurrency is the future. The only question is when will this future come? We think that BTC will be something like digital gold. It is unlikely to be used as payment method at least due to that people won’t to transfer an asset which can expectedly rise in value. Other cryptos, like Litecoin, Dash or probably more perfect cryptos will play this role. As bitcoins are limited in quantity, the price for crypto will rise and, in our opinion, may even reach $1 million (as predicted by McAfee).

Winklevoss brothers (Cameron and Tyler) have said the market cap of BTC will reach 5 trillion by the 2030s. So it is possible to assume than the crypto’s capitalization would reach $8 trillion capitalization by 2050. You can calculate the value of one coin, considering its total quantity.

We must admit that BTC is a speculative asset. The so-called whales regularly perform price manipulations. But at the same time, Bitcoin and the technology standing behind it are definitely revolutionary. In what case can we expect price rise? The market needs more thorough regulation to prevent price manipulations. In addition, the crypto needs adoption.

Such factors as creating appropriate infrastructure, news that institutional investors use non-exchange methods to buy crypto, big companies’ entering in the field of cryptographic currencies, forced us to believe that Bitcoin price will rise. When it will happen? Nobody knows for sure. We think that BTC price will soon touch $10k mark and probably go even higher. Bitcoin ETF adoption and other factors might serve as a trigger of such a scenario. Who knows, maybe in 2050 (or even in 2025) BTC will be widely used worldwide like USD now.

Our opinion on the BTC price prediction in expressed in the picture below. 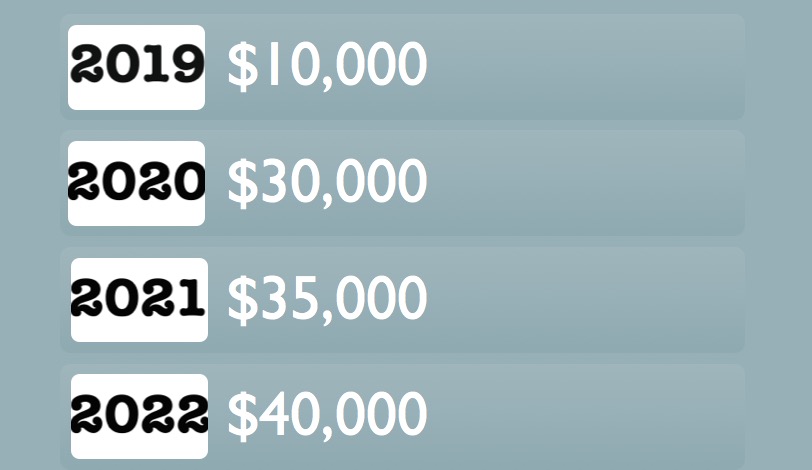 Disclaimer. This was the information to mull over. Don’t treat it as an investment advice. The forecast of the cost of Bitcoin shows the maximum prices that are possible during a certain period. Consider that the cryptocurrency market is regularly subject to corrections.